At Europe’s door, Armenia is becoming an important hub for wildlife trafficking from Africa and Asia, including the import of bonobos and other endangered species through Guinea, according to a report by the investigative website, Hetq. The report states that many animals are then trafficked on to Russia, China and the UAE.

Some of the animals brought to Armenia remain in the country, like the bonobo (Pan paniscus) in the photo below here. Native to the Congo Basin in the Democratic Republic of the Congo (DRC), the sale and export of the animal is internationally banned. Despite the ban, the bonobo can be seen caged in the newly opened Jambo Park located in Dzoragbyur, owned by the businessman Artyom Vardanyan. Mr. Vardanyan boasted in a local Armenian TV show that he paid a lot of money for the bonobo, who was purchased with what it looked a genuine CITES permit from Guinea.

A 2013 report jointly published by the United Nations Environment Programme and UNESCO entitled Stolen Apes: The Illicit Trade in Chimpanzees, Gorillas, Bonobos and Orangutans reveals that Guinea is engaged in the granting of falsified permits. Hetq reports how the CITES Secretariat sent a mission to Guinea and discovered that 69 chimps had been taken out of the country in 2010 alone, destined for Chinese zoos and safari parks. Investigations by non-profits and individuals reveal that 138 chimps and 10 gorillas have been exported to China in this manner – this, despite the fact that no breeding farms exist in Guinea.

From 2011 to 2012, several exotic animal  species were imported to Armenia –  leopards, crocodiles, several types of monkeys, lions, large numbers of wild boar, a wide variety of parrots, snakes, and others.

The Elephant Action League fears that Armenia could also work a center to smuggle ivory and rhino horn.

In the picture: the baby bonobo in Armenia. 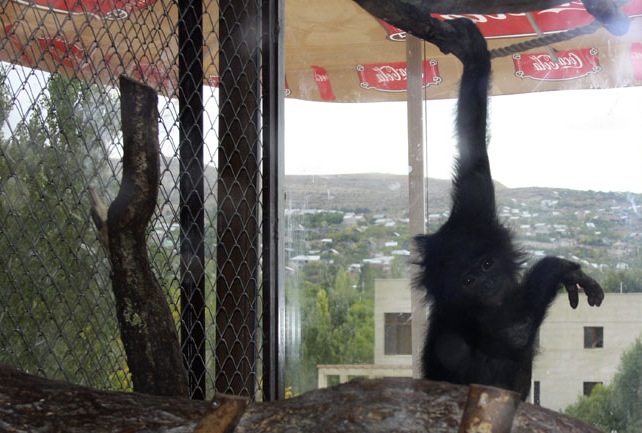