OPERATION FAKE GOLD – the Totoaba Cartels and the Vaquita Extinction 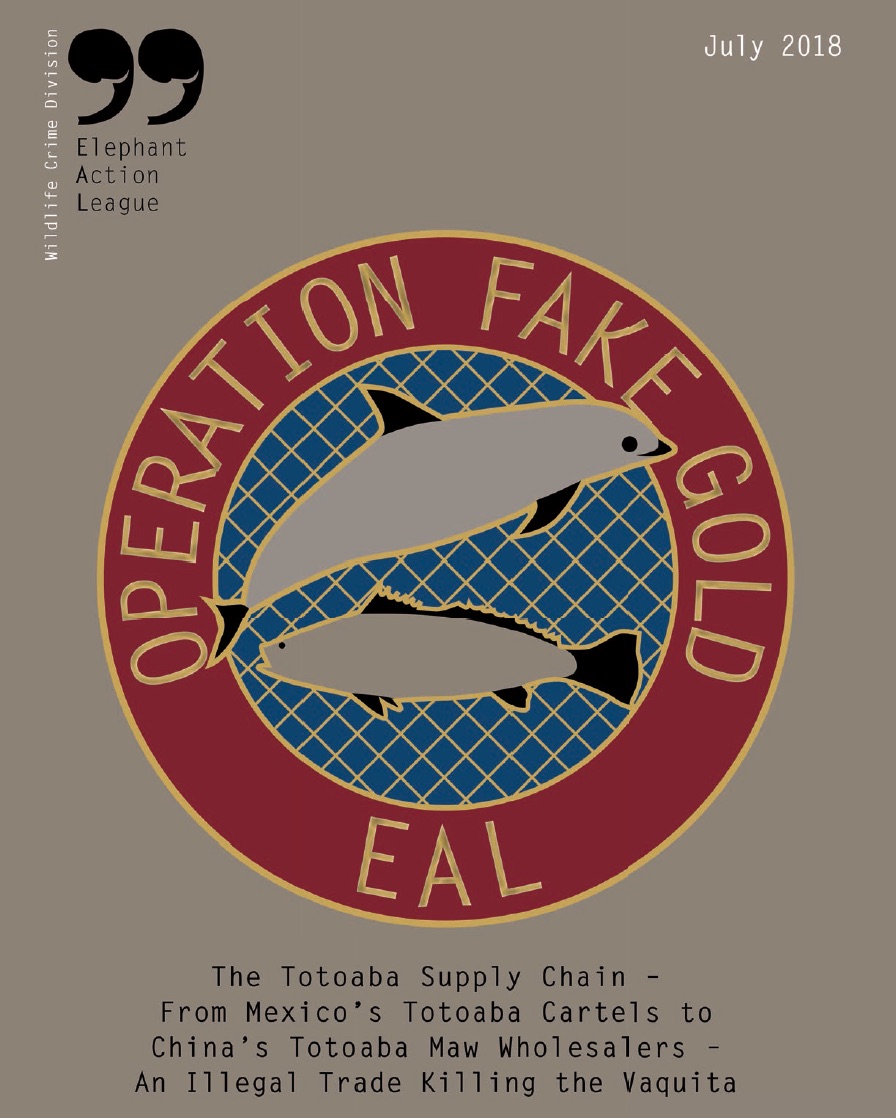 The vaquita, the world’s smallest and most endangered porpoise, is nearly extinct due to China’s demand for the swim bladders, or ‘maws,’ from a giant Mexican fish called the totoaba. By-catch from the Illegal fishing of totoabas with the use of gillnets is killing vaquitas. In fact, the use of gillnets for illegal totoaba fishing is endangering the entire marine ecosystem of the Upper Gulf of California. The International Committee for the Recovery of the Vaquita (CIRVA) estimated that, as of November 2016, no more than 30 vaquitas remained. Analysis of 2017 acoustic monitoring data showed that the decline of the vaquita has continued unabated.
The retail price of totoaba maw on the black Chinese market has been recently quoted up to USD 46 per gram in China. The price of gold is currently hovering around USD 40 per gram. This is why totoaba maw can be considered ‘fake gold’ and why the totoaba fish became swimming gold for Mexico’s fishermen. A fisherman in San Felipe, Mexico, can earn more in one night catching a few totoabas than they may otherwise earn in a year.
Through Operation Fake Gold, Earth League International has identified what can only be described as “Totoaba Cartels” in Mexico. The totoaba cartels specialize in the poaching and trafficking of totoaba swim bladders – the bottom half of the supply chain. The chain starts in the villages of San Felipe and Santa Clara along the Gulf of California coast, but moves quickly to central smuggling operations in cities like Tijuana and Mexicali. Our investigation has found that these cartels are led primarily by three Mexican criminals who fund the Mexican poachers, and then sell the swim bladders to a group of well-connected Chinese traders and businessmen residing in Mexico. It is those Chinese traders that facilitate the smuggling of totoaba maws to China – the top of the supply chain.

Primary findings from Operation Fake Gold include the following:

The real ‘fake gold’ is the totoaba female maw only (bigger). Raw female swim bladder, from 500 grams to 2 kilograms, is larger and thicker than the male’s and is valued at each level of the supply chain as follows:
– From fisherman to first buyer: USD 3,500 to 5,000/kg
– From San Felipe buyer/transporter to Mexicali buyer: USD 5,000 to 8,000/kg
– From Mexicali buyer to China buyer: unknown
– Retail price in China: USD 20,000 to 80,000/kg
Earth League International believes that dismantling all the various networks associated with the totoaba black market is the best chance to end totoaba trafficking. This effort should begin with the middlemen – those Chinese nationals in Mexico who supply the market in China. Ultimately, though, the root of the problem, the demand, must also be destroyed.

We identified the complex factors surrounding the extinction of the vaquita and the destruction of an incredibly important ecosystem. It is not only about the fate of the vaquita, but of the entire eco-system of the upper Gulf of California. Efforts now must shift toward the protection of the Gulf of California in general. The Gulf contains incredible marine life that will also be destroyed by the continued use of gillnets and the continued exploitation of its wildlife.
Our Wildlife Crime Division has worked tirelessly to gather the intelligence needed by authorities to disrupt the totoaba supply chain, and ultimately, curb illegal fishing in the Gulf of California. Much of the detailed data gathered during Operation Fake Gold only appears in a Confidential Intelligence Brief (CIB) that has been prepared and submitted to law enforcement authorities in Mexico, China, and the United States. The CIB contains all the non-redacted data gathered regarding the key players, their networks and enablers, and the complete modus operandi of these traffickers and traders, including concrete evidence of illegal activity uncovered during the investigation, as well as hundreds of photos and hours of relevant undercover footage.

The documentary ‘Sea of Shadows’

Finally, through all these months, our work and activities have been filmed as part of the most significant documentary on the vaquita to date,  ‘Sea of Shadows’, acquired and distributed by National Geographic.

Produced by Terra Mater Factual Studios in collaboration with Leonardo DiCaprio’s Appian Way, it was directed by Richard Ladkani/Malaika Pictures, in collaboration with Wild Lens Inc..  Sea of Shadows, premiered at the Sundance Film Festival 2019, winning the Audience Award, will be released on July 12, 2019.